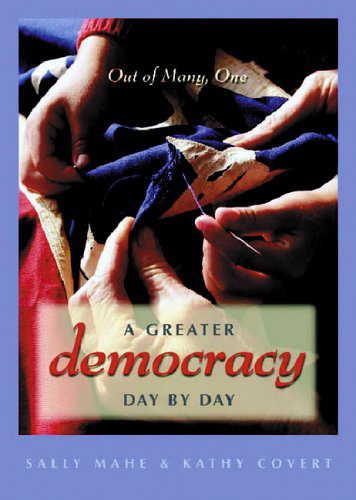 When the U.S. unleashed its “shock and awe” campaign against Iraq in 2003, I had to do something to counter the horrific behavior (in the name of democracy) that the U.S. was exporting to the world.  I co-authored A Greater Democracy Day by Day, which includes 365 quotations to uplift the human spirit and provide a deeper understanding of democracy.

To Order: Published by Council Oak Books, 2004, A Greater Democracy Day by Day is currently available through Millichap Books, Inc. https://millichapbooks.com/?page_id=39 and at Amazon. Book is not available digitally.

The word democracy has been over-used and misused to the point that it has begun to lose its meaning for many of us. When people start brandishing that word, we often suspect that they have a political agenda.

A Greater Democracy Day by Day rehabilitates the word by bringing together 365 thought-provoking quotes from around the world and through time, all centered on this concept that is the keystone of modern society. The book presents a theme for each month and a quote about that theme to ponder on each day of the year.

Like “fingers pointing to the moon,” these diverse daily readings point to the singular essence of democracy — a greater democracy than any nation on earth has been able to achieve thus far — the fuller democracy toward which we are growing.

The format is user-friendly as well as inspirational. Throughout the year, the book focuses on twelve characteristic democratic themes such as “interdependence” or “creativity” and provides related quotations from individuals both famous and lesser-known. What emerges is a powerful sense of both the fragility and the durability of democracy in its many forms, as well as the ways its promise continues to prompt ordinary people to bring the “better angels of their nature” to the challenges they face.

Quoted are such diverse figures as Albert Einstein, Martin Luther King, Jr., Plato, Franklin Delano Roosevelt, Socrates, Archbishop Desmond Tutu, St. Francis of Assisi, Bruce Springsteen, Leonard Cohen, Whoopi Goldberg, and all sorts of lesser-known individuals who have given thought and voice to the meaning of democracy (and in many cases acted on their ideals).

This inspirational book cuts through the rhetoric to integrate practical and spiritual themes. It re-infuses “democracy” with meaning and inspires readers to new vision and positive action.

About the Book:  What Does Democracy Mean to You? by Neil Dickens (2004)

For some, democracy nowadays feels like an abstract notion. What’s more, its discussion may even be taken as political agenda. Buried in confusion, shrouded in sentimentality, could democracy have lost its way? Not to authors Sally Mahé and Kathy Covert who have put together a series of democratically inspiring quotes in “A Greater Democracy Day By Day.”

Adhering to a complete calendar year, the book proposes monthly themes such as “interdependence” and “creativity” and draws on leading individuals for a quote for every day of the year. With democracy meaning different things to different people, in its diverse presentation of quotes, the book also presents an opportunity for individuals to decide what democracy personally means to them and to reconnect with both their deepest intentions and freedom of spirit. Inviting people to soak up practical and spiritual themes and create for themselves a unique meaning of democracy, “A Greater Democracy Day By Day” inspires democratic vision and catalyzes action.

Einstein, Dr. Martin Luther King Jr., Plato, Roosevelt, Socrates, Desmond Tutu and St Francis of Assisi are just some examples of the prominent individuals mentioned in the book. The book also cites populist contributors Bruce Springsteen, Whoopi Goldberg as well as everyday citizens, futurists, historians and teachers: a compilation of quotes from individuals who through the course of time have put forward their own ideas, beliefs and democratic agendas.

“Democracy in its simplest form of sharing power, listening, and gathering information, is the only sustainable form of governing ourselves, because no one likes being told what to do by others.” — Arnold Mindell, psychologist and writer

Beginning with the peace-loving “Five Nation Confederacy” upon which the Gayanerekowa — cited as the first true American democracy — was based, the book tracks the early foundations of American democracy through the Constitution of the Iroquois Confederacy right through to the present day. Presented in a democratic fashion itself, through 365 quotations each themed chapter-by-chapter, the reader is able to interpret for his or herself what democracy is and truly means. Through quotation, it gives an historical appraisal as well as truth to the essence of democracy.

“I am a citizen, not of Athens nor of Greece, but of the whole world. The world is my parish.”  — Socrates, philosopher

Authors Sally Mahé and Kathy Covert are American citizens dedicated to the birth of a greater democracy in the United States and throughout the world. Mahé is a civics teacher, spiritual counselor, and organizational innovator. Currently she is a Regional Director with the United Religions Initiative, a global interfaith organization. She is co-author of Birth of a Global Community, Appreciative Inquiry in Action, published in 2003. Kathy Covert, citizen, civil servant and internal change agent, is an associate strategist at the Federal Geographic Data Committee and has a M.A. in Geography from Syracuse University.