Have you experienced being what you want the world to become?  Even if only in sparks and flashes, it’s amazing to experience the reality of the ideals we are striving for. There is power in these moments to re-generate ourselves and our visions. We don’t have to wait a millennium to get there!

SPARKS gives glimpses of a spiritual democracy in action right now. Enjoy what you read here and, even better look for sparks happening in your life. Please contact me if you would like to share your story. 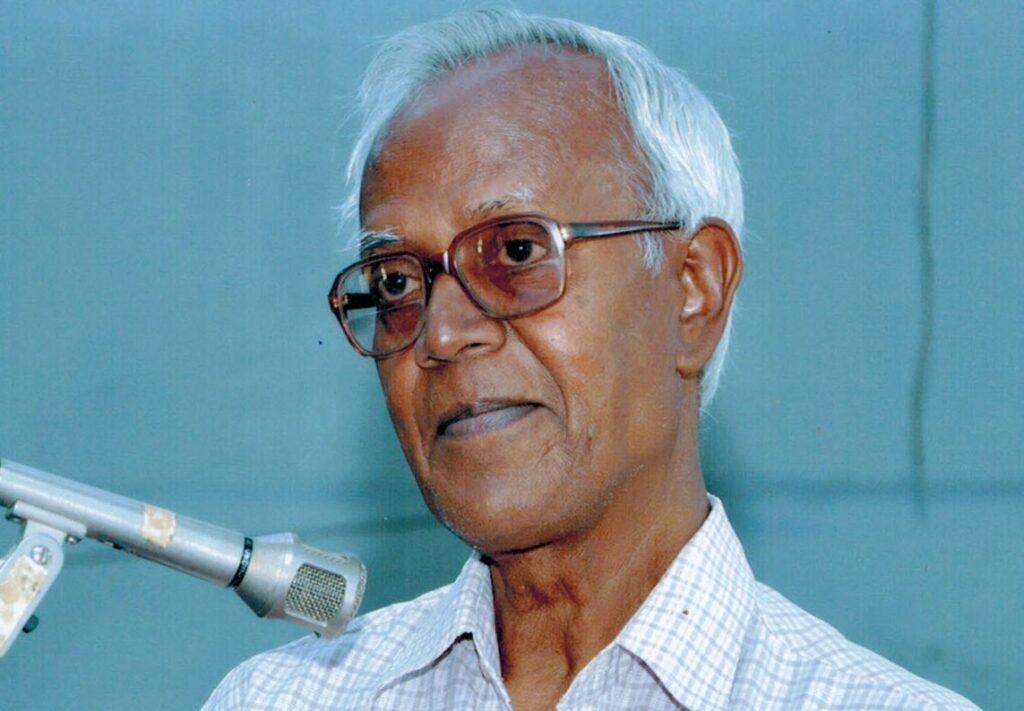 Stanislaus Lourdeswamy (known as Fr. Stan Swamy) was a Jesuit priest and a fighter for the rights of marginalized people. He died in Mumbai, India on July 5, 2021. He believed that the Adivasis (Original Forest Dwellers), who are indigenous peoples of India and considered outcasts/backwards by the predominate caste system, have a natural right to self-determination and to live on their ancestral lands, a right that must not be stolen by multinational corporations. Fr. Stan’s conviction that all people deserve basic human rights and to be treated with human dignity, is a flame of truth that will not flicker out. Fr. Stan was a gentle giant who could speak with fire in his belly and with the feeling that he was going to hold you. Stan embodied the reality that in gentleness is strength.

Fr. Stan sent sparks flying lighting up the heart of democracy. Here are a few highlights from his story.

During Fr. Stan’s seminary schooling he worked in a rural village in the summer time. One afternoon he overheard a father tell his son, “Go out to the big mango tree in the backyard. Go up and bring down the fruits, but leave one branch with all of its fruits…that one is for the birds of the air. These words transformed his values:

He witnessed Adivasi women carrying their chickens to market and how they were attacked, their chickens stolen, and insufficient bills thrown in the dirt as payment. Experiences like these convinced him to live his life in pursuit of basic rights and human dignity for the Adivasi and Dalit of his home state of Tamil Nadu.

He saw how the Adivasi’s self-sustaining economy and governance rooted in ancient tribal ways was undermined by being forced to operate in a market economy, a system that exploited them and deprived them of their tribal values and respect.

He started the Bagaicha Center in the state of Jharkhand where people resisting unjust displacement from their tribal lands came together in solidarity with each other.  He educated and trained people to know and stand up for their rights through legal and non-violent means. He told them, “when you get notice that your lands will be stolen away, let us stand shoulder to shoulder and say in one voice, we will not move!”  He taught people to focus on their own strength and be ready to pay the cost.  People stood together not only in resistance to unfair actions by government and corporate interests but to claim that the land was theirs and that whatever riches in the land, was theirs also.  He said, “wherever people are they can start this kind of movement, asserting their nature-given rights which is a predominant right.”

In his fight for the rights of Adivasis against powerful interests, he understood that the sacrifice of his own blood, being wounded and even death, might be required of him.

Fr. Stan was taken into custody on several occasions accused of stirring up communal violence and organizing anti-national forces against the government.  In September 2020, he was taken to a Mumbai jail for further questioning.  Although his health was failing, his bail hearing was continuously denied, even by the High Court.  His request to be transferred to a hospital in Jharkhand was also denied.  He was finally transferred to St. Elizabeth’s Hospital where he died of Covid-19. Controversy persists whether or not he was given needed medical help and due process of law. His followers call him a martyr. He died as he lived, in faithful communion with the marginalized people he loved, because the face of Christ was reflected in them.

In the Adivasi culture it is understood that when you physically leave the body you are not here but you are not gone. Your spirit remains. Fr. Stan gave his life defending a core principle of democracy, the natural rights of people to dignity and justice. May his spirit never leave and always remain in communion.

Truth must be spoken, right to dissent must be upheld and justice must reach the doorsteps
of the poor. Fr. Stan Swami

Information for this blog was taken from following sources. To learn more go to:

Thank you to Rev’d Dr. Matthew Cobb, www.walksback.com for his reflections about Fr. Stan.

Marian Anderson at the Lincoln Memorial 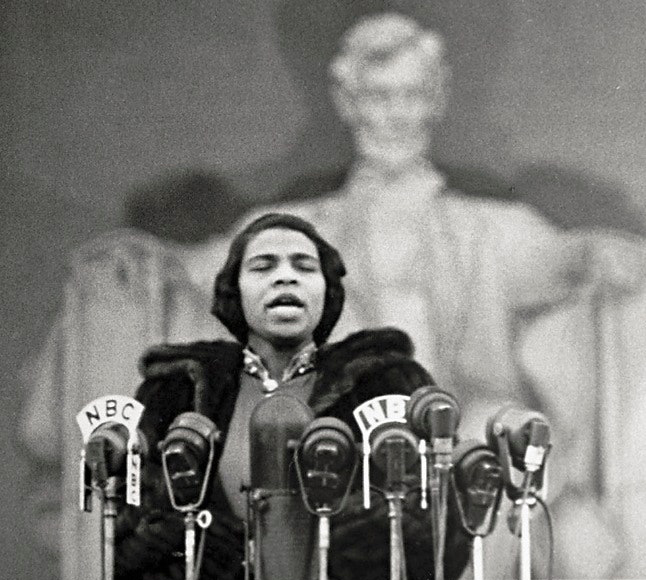 History is chock full of flashes and sparks of democracy rising to its finest potential. We can hear it in the grace and glory of Marian Anderson singing “My Country Tis of Thee” at the Lincoln Memorial in 1939.

Already a famed classical vocalist, world-renowned as “the voice of the century,” Marian Anderson was denied access to perform at Constitution Hall in Washington D.C. because of a rule banning black performers. Through the efforts of First Lady Eleanor Roosevelt and Secretary of the Interior Harold Ickes, it was arranged she would sing outdoors for the public at the Lincoln Memorial. 75,000 people attended.  Nervous because she was facing the biggest audience of her life, Anderson said, “I could not run away from this situation. If I had anything to offer, I would have to do so now.”

Instead of singing “of thee I sing” she sang “to thee we sing.” Years after, she explained that, “We cannot live alone, and the thing that made this moment possible for you and for me, has been brought about by many people whom we will never know.”

When the Daughters of the American Revolution refused to allow Marian Anderson to sing at Constitution Hall, Eleanor Roosevelt objected and withdrew her membership. Anderson said, “Mrs. Roosevelt’s decision did not surprise me because she understood the real meaning of democracy.” 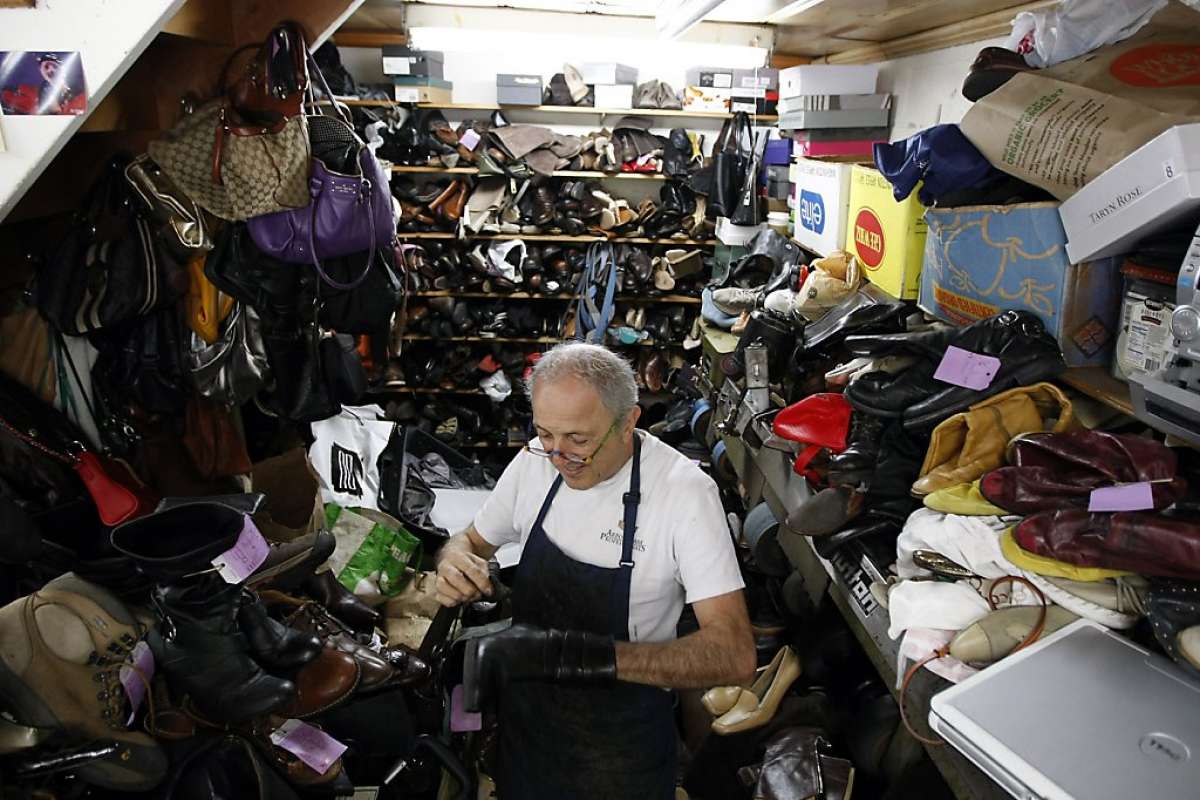 This story taught me that even without having words to understand spiritual democracy we can see it in action if we look. Some years ago, my daughter and I visited the shoe repairman in town. A week earlier I had brought in her winter boots which he described as “tire blow outs.”

As we entered the tiny shop, to the left was a jumble of broken luggage; all around, shoes akimbo were piled high in various worn states of disrepair.  It was one of those shops that is disappearing — a good smelling and messy shoe repair. It was a busy Saturday morning. Tony, the proprietor was present — beaming warmly. As he handled our order, with a little banter of conversation and a caring demeanor he looked at us and said to us, “you’ve done a good job raising a fine daughter and she can be a guide and helper to you.”  A hidden “higher self” in Katie and me woke up. I wasn’t a Mom just vaguely wondering how my life would intersect with hers as she made her way in graduate school and beyond. Katie wasn’t just a young adult vaguely wondering how she might be called on to care for me someday. This little remark shifted our consciousness. We felt uplifted. We weren’t exactly sure how this shift happened in us — was it the vibration of Tony’s generous spirit? his warmth?  his insightful comment? Katie said, “I’m always coming back here.”

I reflected. Here is Tony, like the shoe cobbler archetype from fairy tales, giving humble service to “journeyers” every day. He mends things people need for their journey — shoes and suitcases. While doing that, he offers deeper, greater things too. He works with a peaceful, giving spirit and an honest joy. When we are with him, we are changed. His heart-gift touches us and lifts us to a better place, a higher “see level” so to speak.

Tony is a change agent for spiritual democracy. He exercises civic spirit, not only by participating in voting and governance issues, but in the quality of his personhood.

As we reach for how to further a deeper democracy — let’s look out for people who, like Tony, are living it right now. If we share these stories we may help our dear friend, spiritual democracy, rise up from our hearts and souls.