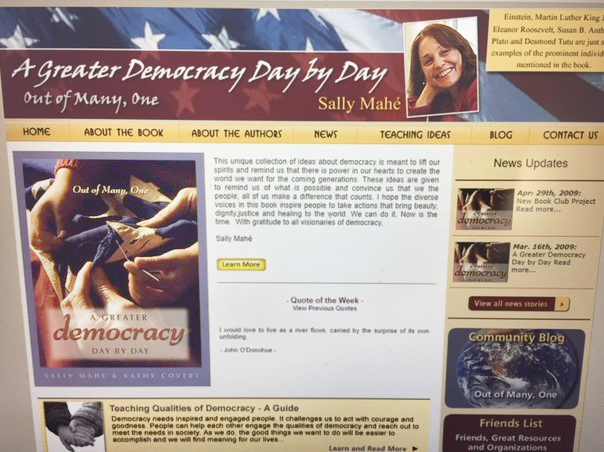 You might say that the book, A Greater Democracy Day by Day, was my “first date” with spiritual democracy. Even though we (me and this amazing idea) had been mutually attracted for many years, doing that book was the first time we stepped out together to begin to bridge two seemingly disparate worlds. We agreed that ‘democracy’ was more than a system of government and that ‘spirituality’ was more than an expression of religious beliefs but we were still very shy and overwhelmed by the extraordinary shift that might happen when these two words werepaired together and embodied. At that time, all we could do was to collect quotations from a range of sacred and secular perspectives and allow people to make inferences of connection themselves. My friend, spiritual democracy, and I were not ready to step out in public and explain ourselves.

We’ve been getting to know each other by asking questions and having awkward conversations.

SM: So, want to tell me more about yourself, spiritual democracy? I’m drawn to you like a magnet, but I don’t really understand you and what you offer.

SD: There is much to explain, but let’s just start here: The word ‘spiritual’ used to be understood primarily in relationship with religious beliefs and practices. People who practiced their religions were considered ‘spiritual.’ As time went on, ‘spiritual’ expanded in meaning to refer to a personal relationship with a higher power. This higher power was called by many names and pointed to something more — something greater than humankind. During this time, personal spiritual practices were nurtured. The word ‘spiritual’ broke away from a strictly religious context and entered into the people’s private domain. The phrase, “I’m spiritual but not religious” emerged. Spiritual expressions flourished in the secular domain. Books like The Soul of Money, Sacred America and Spiritual Politics hit the market. Topics like spirituality in the workplace, spiritual citizenship, and spiritual education gained attention. Now the word ‘spiritual’ can be placed in front of the word ‘democracy’ without causing too much of a ruckus and people seem open to the idea, but the depth of my meaning is still to be discovered. Like other new ideas, words of explanation may lag behind experience.

SM: How can we begin to penetrate your meaning?

SD: Well, we may have to play with several ideas and definitions for a while. You and I and most everyone else are working this out together. Let’s start with these ideas:

I, spiritual democracy, am the process of life embodied by people day by day to make a better world. As people do this, their essential unity — sense of oneness — is awakened.
I am people acting from their truest or highest nature for the benefit of all life.
I am the invitation wherein every person is called out to act for the common good.
I am, in fact, a divine flow of energy that courses within the soul of every person. As they open to their unique soul intention and act out the unique purpose of their lives, they participate in and create spiritual democracy.
I am a lively context that encourages participation for the common good (not a noble idea that sits on a pedestal).

SM: Thanks! Inspiring words and a lot to think about.