Prairie path leads to the sky path; the paths are one. Continents are two; and you must make your journey from the prairies to the sky.  — William Quayle 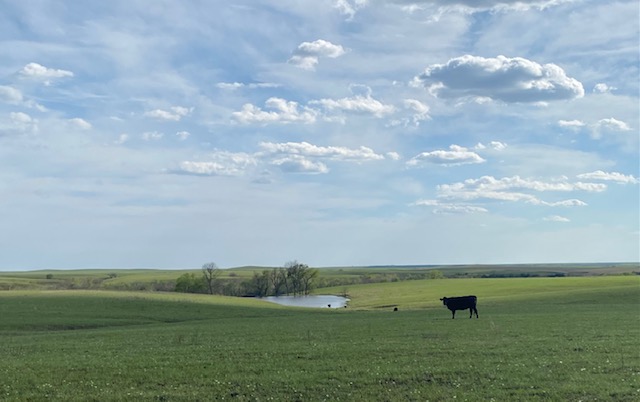 A drum vibrates. It ripples from a little white chapel across the tall grass prairie in Chase County, Kansas. The beat is African, it’s somehow familiar. The ancient ones are stirring. Wounds are healing. Spirit laughs. The drum beat gets louder. People walk outside the chapel and sit in a circle in the shade of trees. They receive communion of fresh-baked biscuits and grape juice. Shyly, they pick up rhythm instruments and keep beat with the drum. Children begin to play and dance, most everyone is clapping, smiling. A few sit on the outside of the circle, reluctant to join in. All are welcome. We are bridging ancient past with emerging future! I’m prairyerth and I want to tell you a story.

Long ago, the Kaw (Kansa) people of the south wind also gathered near this spot. They crafted spear points and arrow heads from flint rock. They beat drums, circled around fires, told stories and danced. They mingled with other tribes, the Osage, Pawnee, Comanche. There was reciprocity between me and these tribes. We cared for one other. They took my plants for healing. They traveled with the buffalo, respectfully using every part of it to stay alive. I provided expansive, rich open space: food, shelter and spirit pathways from the earth to the sky. Sadly, these people disappeared, were killed or run off to other places. The buffalo disappeared too, slaughtered by the hundreds of thousands. Men from faraway places laid railroad track across my wide open spaces. Waves of European women and men arrived. They built mud-grass “soddies” and log shanties, raised children, grew communities. They settled on the prairie and co-created with me, tending gardens and raising livestock. They buried their dead in me and I held them in their grief, loneliness and desperation. Some chose to move away, but I remained, my imperative was to sustain the people of this land.

Matfield Green was named by David Mercer, a first postmaster, after “Matfield,” his favorite place in England, known for its fine houses that encircled the village Green. My rolling, green grasslands are not like that — they are vast, free and wild. It’s impossible to fence me in within the confines of a village!

Track crews from the Santa Fe railroad were sent to Matfield to maintain the railroad tracks. Ranchers bought land, divided me into grids, cut property lines cordoned off with barbed-wire fences. They raised cattle all year round and in spring they brought in even more cattle to graze on my lush grasses and fatten up on their way to market. Families settled, worked hard, built schools, adapted to the persistent winds, and faced economic good times and bad.

As people focused attention on achieving prosperity and security, my enduring presence, spirit of freedom, open space for being oneself and my mystical paths connecting earth to sky, were often overlooked and forgotten. Without peoples’ loving attention, I grew distant.

On that day, the peculiar drum beat from the Matfield Community Church re-awakened my biggest dream — to live in mutual communion with the people here. I wanted us forever to be on pilgrimage, to tenderly walk the prairie path to the sky path together. I dreamt that we were one community; breathing, co-creating and deeply enjoying one another. Maybe the Matfield church was a place where we could meet in new ways. 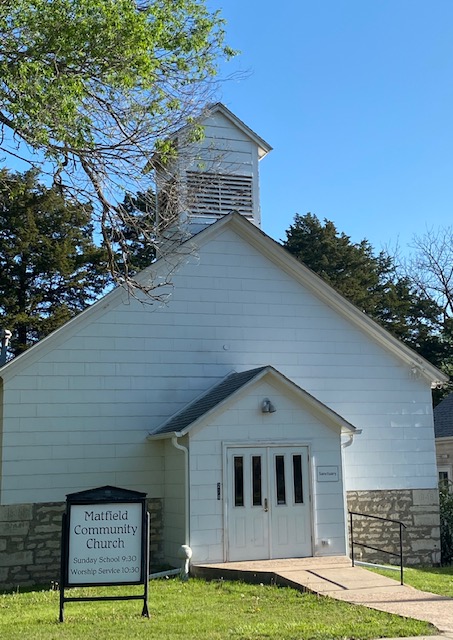 Some years back, the Matfield church was being fought over. Carla Jo, a church member for over 60 years, came on Sunday morning with a cassette tape recorder and sang hymns by herself. There was no minister onsite and most people had lost interest in going to church. The chapel and community hall next door needed repairs and tender loving care. Some villagers wanted to transform it into a venue for concerts and lectures. People talked and argued about its future.

However, my dream-weavers were already at work. Prairie “walkabouters” (a few folks from Kansas and as far away as California) heard my call to go on a prairie pilgrimage to Chase County. Their intention was to walk the land, listen and be open for anything. Weaving one with another, I helped the “walkabouters” connect with the local folks. Jane, an important rancher, graciously gave permission for them to walk her land. They heard about the church tensions from Clara Jo, Mindy, Paula, Ton and Ans.

The “walkabouters” decided to return each year. The next year they came with Onye, a drummer born in Nigeria, who offered to join in a Sunday church service. Clara Jo baked communion biscuits as usual, the “walkabouters” festooned the church with sunflowers, selected prayers for the Earth were read. Everyone contributed to a potluck feast that included Nigerian fried yams! That day, Onye’s healing drum touched hearts. Spirits danced with possibility.

It wasn’t long before Matt and Tia and their two young children settled in Matfield Green. Raised in the Mennonite tradition, Matt offered to serve as minister and Tia as music director at the Matfield Community Church. I’m happy to tell you that this church community is getting to be a lot like me! It is an open space where people can be themselves and where generosity and reverence thrive. Matt creates a safe, respectful space for people to respond to the readings, to be themselves, to feel accepted and cared for. Children are happy and people say that good things are afoot in Matfield Green. Prairyerth energy flows from me to people’s hearts and back again.

Prairyerth life is not lived in straight lines. People who truly walk with me wander, meander, backtrack, perhaps decide to take a new path, and eventually find their way. Prairyerth is a green-ocean landscape vibrating with sacred spirit; and, it is a journey from the prairie path to the sky path. Come, let’s walk the path together.